Ebola virus disease (Ebola), first discovered in 1976, is a severe infectious disease that causes organ failure and death in humans. Outbreaks have occurred in parts of central and west Africa, near tropical rainforests. Download an Ebola information sheet. 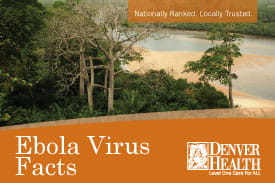 How is Ebola Spread?

People can get Ebola virus in two ways: from an infected wild animal or from another person who has Ebola.

Who is at risk for getting Ebola?

People at highest risk for getting Ebola include:

At this time, there is little risk for the general U.S. population.

What are the signs and symptoms of Ebola?
Early symptoms such as fever and muscle pain are non-specific. These are followed by more severe symptoms including:

Ebola outbreaks have a fatality rate of up to 90 percent. Treatment is more effective if started early.

How can you prevent Ebola?