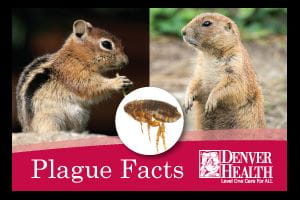 Plague is a disease that affects humans and other mammals, caused by the bacterium Yersinia pestis. There are three types of plague, and symptoms may depend on which type a person has: bubonic, pneumonic and septicemic. Download a plague fact sheet.

How is plague spread?

Plague can be spread to humans and other mammals in many ways. The most common ways include:

What are the symptoms of plague?

Without prompt treatment, the disease can cause serious illness or death.

Who is most at risk?

What should I do if I think I have plague?

How is plague treated?

How can I prevent plague?