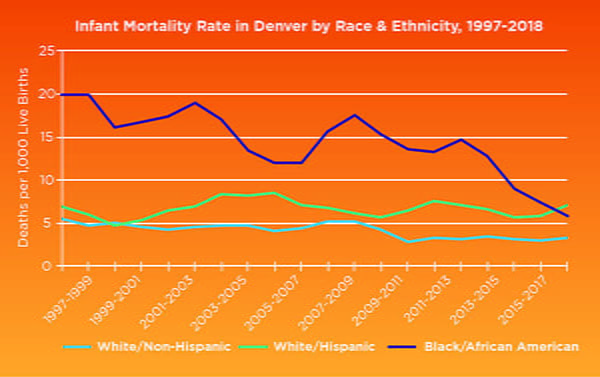 What is Infant Mortality?

Infant mortality refers to the death of a young child under the age of one year. Rates are calculated by counting the number of infant deaths for every 1,000 live births. Since these numbers are small in Denver, and often vary from year to year, a three-year average is used to calculate rates. This approach averages three years of data to create a more stable measure.

Leading Causes of Mortality for African American Infants in Denver

Newborn and maternal medical complications contribute to 22 percent of all infant deaths. Disorders related to prematurity and low birth weight comprise 17 percent. Other perinatal conditions (other diseases or disorders related to the time before birth through 28 days after birth) contribute 15 percent. All other causes, often affecting one or two infants, make up the remaining 46 percent. Some causes of death are preventable, while others are more difficult to address. 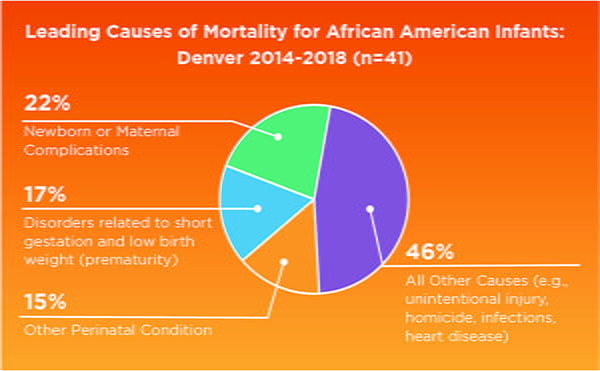 A recent analysis1 using data from 2008-2016 explored changes in Denver’s African American infant mortality rate. Although no single cause for the decline was found, a number of factors may be contributing, such as:

We are employing a combination of efforts to stop preventable infant deaths, including education, health and social programs, and dedicated efforts to address racial inequities.

Partnerships between health care, public health, grass roots community organizations, employers, community members, and family advocates are all important in preventing infant deaths. Learning about these approaches and raising awareness in the community are ways we can all support women and families.

For more information or to partner with us, please contact denverpublichealth@dhha.org.

Read our other Health Indicators: